To move rainwater and stormwater away from the district of Ydre Østerbro, HOFOR, the capital area utility company, is constructing a tunnel that can discharge the rainwater directly into the harbour.

The Østerbro Tunnel is one of the first to be built by HOFOR. It is intended to ensure that Ydre Østerbro escapes the foods at Svanemøllehallen, the S-train line and the former Øresund Hospital. Several schools, institutions and associations in this area have been hit hard by flooding when torrential downpours occur. When the rainwater is discharged directly into the harbour, we can quickly remove water from the roads, and in addition we escape having to pump the clean rainwater out to the Lynette sewage treatment plant.

It is therefore a solution that safeguards the areas in the event of torrential rains and at the same time relieves the sewer system and saves the environment in pumping the water the whole way through the city. It is one of the first stormwater tunnels, and it is a solution that HOFOR expects to have to use at several other places in Copenhagen.

The principle of the tunnel is reproduced on this drawing, which has been distributed in connection with start-up of the project.

The building site at Lautrup Kay in August 1985. The circle marks where HOTOR excavates and lowers the boring machine. It is intended to bore below the railway line and further onward towards Johan Svendsens Vej. 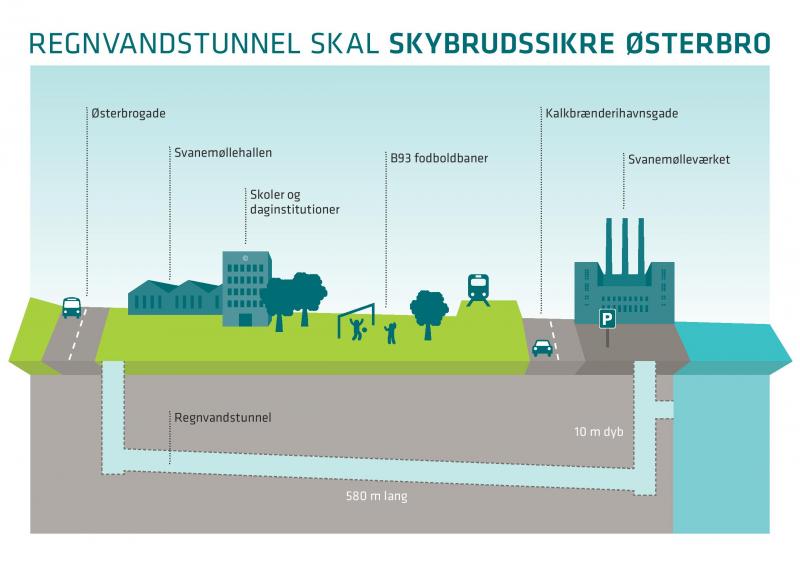