The vision is to transform the square of Skt. Kjelds Plads into the green heart of the Climate-Resilient Neighbourhood. A beacon for how we create the climate change-adapted urban spaces of the future. An urban space where nature is permitted to spread and where traffic operates in fine interaction with recreational areas.

We are adapting Skt. Kjelds Plads and Bryggervangen to climate change at the same time, in response to the rising volumes of rain expected in the future. We adopt green and blue solutions that bring nature into the city, where it makes life better, healthier and more social for the residents of the Climate-Resilient Neighbourhood.

The landscape architects SLA Landskabsarkitekter, the consultancy Alectia and the engineer Jens Rørbech are behind the winning proposal for the Skt. Kjelds Plads and Bryggervangen of the future. It will create a symbol for the Climate-Resilient Neighbourhood, showing how rainwater management can provide a spectacular setting for green, social and active everyday life in the city.

“Urban nature is a new kind of nature in the city. Urban nature is the grown environment in co-existence with the built environment […]. Urban nature has both a practical function and an aesthetic function. It can solve a huge number of problems faced by our cities today – from overheating and pollution to cloudburst management and climate change adaptation. But it can also make life more worth living and provide inspiration for new social communities, new opportunities for creativity and new active and healthy ways of living.” 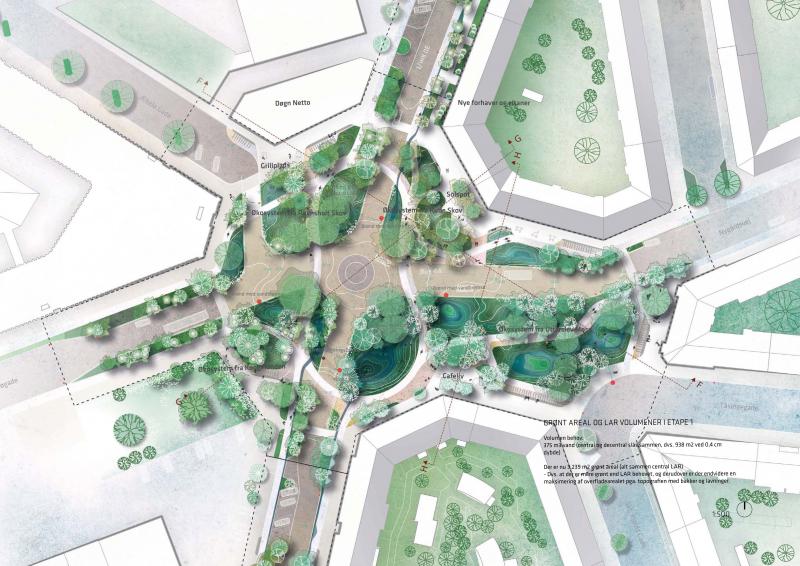 The project uses the latest strategies in climate change adaptation in the city’s spaces. 30% of the rainwater is managed on the surface in green areas, and when torrential downpours occur the surplus water is carried through cloudburst roads and pipes to the harbour. Rather than using salt during the winter months, the intention is to use potassium formiate in the area to prevent icy conditions on roads, which makes percolation in green areas possible for a far greater extent.

The project adopts the First Flush method, where the first dirty rainwater on the carriageway is conveyed into the sewers, but the subsequent clean water (Second Flush) is conveyed to percolate in green areas.

The residents and the business community in the area have been involved in the development of the project ever since it started in 2012, through a number of citizens’ meetings, workshops and project groups. The programme for the project has been developed on the basis of this preliminary work.

“It is important that the residents are involved in the process of developing the urban space. As a result, a more site-specific urban space is created that is adapted to the specific conditions and the life there is in the area. The process is also important in giving the residents knowledge and ownership of the project, so that they feel reassured in relation to the future inconveniences caused by construction, and so that they occupy the new green areas as their own when the project is completed.”

In the spring of 2015 SLA landskabsarkitekter won the project competition with their outline proposal ‘Use nature in the city‘. The project has been confirmed and is planned for completion by the autumn of 2016. In this phase a local monitoring group of residents and selected representatives of the business community in the area has been attached to the project to provide knowledge and input.

The actual rearrangement of Skt. Kjelds Plads and Bryggervangen is expected to start fall 2017 and be completed in the end of 2018.